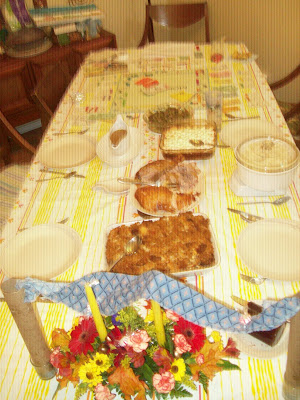 Now that was a Thanksgiving worth blogging about ;]
Of course we have to start with the food. Tricia tried two turkey techniques she hasn't done before and was ecstatic with the result. Brining the turkey for a number of hours, and using Alton Brown's Turkey Triangle to keep the white meat moist. She said it was the most moist and just all around best turkey she has ever made. Although she wasn't happy with the experimental spelt dressing (which she enhanced the next night to great effect), that didn't take away from the fantastic meal which also included Charlene's requested sweet potatoes with marshmallows, and homemade mashed potatoes and turkey gravy all pictured here (in the foreground is a half-price centerpiece find from the turkey-buying trip... plus some embellishments by Ian).
I, on the other hand, successfully carved the turkey for the first time by getting a few turkey carving pointers from another video (I picked the shortest listing from search results, of course). They didn't mention in the video that the turkey was going to try to burn my fingers, though ;] And I still have no idea how he got such appropriate slices out of the thigh meat... mine just fell apart.
While things were cooking, the kids had the bright idea to break out Monopoly (in the back of the picture) which we may never before have played as a family of 4. Although the game was cut short (and recorded for picking up later in the weekend) by cooking and eating and so on, we all had fun. (Ian was winning).
Somewhere in the middle of all that, I successfully called my brother Doug for the first time who is stationed all the way over in Germany, and we all got to chat with him for a while which was really wonderful.
Earlier that day we had a visit from my Dad who brought some "heirloom" chairs we will be using in our dining room and a bag my mother owned he brought for Tricia which of course made her all choked up.
We all ended it with some homemade pumpkin and cherry crumble pie which were also superb (and with an unnoticeably gluten-free crust).
Yay turkeys!
family food games Holiday

Not a particularly interesting post, but I couldn't find this information on the Internet when I searched, so after figuring it out, I thought I should post my results. If you play TF2, you know that some of the voicemenu lines you can say are accompanied by the character doing some animated move.  Everybody is familiar with the "Thanks" voice line giving a thumbs-up animation, but exactly what voice lines give exactly which animation isn't obvious, and the first person models we play in don't animate when we say it. Voice lines are not always clear to the other players, but animations are, and this is especially the case if they're on the other team. So, I started a server, turned on sv_cheats, went into third person, and tried the different voice lines.  I tried every voice line with every character.  I didn't try it with every loadout, but I did notice some differences depending on the weapon choice. I didn't try it on Passtime mode, so I didn
Read more